Introducing the Skjelstang: Difficult to Pronounce, Impossible to Put Down 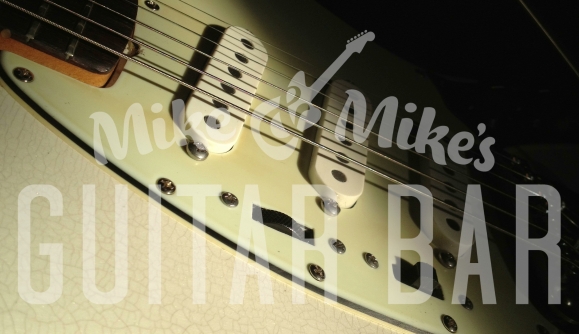 A few months back our good friend Skye Skjelset of Fleet Foxes’ fame (also a stint in The Walkmen and his noise/free jazz band Japanese Guy) contacted us about wanting to build another custom guitar, and we couldn’t have been more delighted. See, we’ve done a lot of work for the Foxes and their various other projects, and each of those guys has amazing taste in gear, both vintage and custom. Any time we can help someone realize their vision – whether it’s world-touring acts or weekend warriors – it reminds us why we even do this job in the first place: we love music, we love guitars and we love people.

You may remember the last guitar we built for Skye some time ago: a four-pickup monstrosity of a Fender Jazzmaster lovingly dubbed ‘The Skyemaster’ complete with a vintage neck and vibrato, Mastery Bridge and two Lollar Jazzmaster pickups with a Gold Foil in the middle position and a Novak lipstick pickup behind the bridge. Let me tell you, what a guitar! The sounds one can coax from that beast are nearly endless, from your standard punchy Jazzmaster fare to amp-killing, raucous sound from the ‘foil and even ghostly, far-away eeriness from the BTB unit. It’s an unbelievable guitar and you can hear it on Japanese Guy’s latest release. 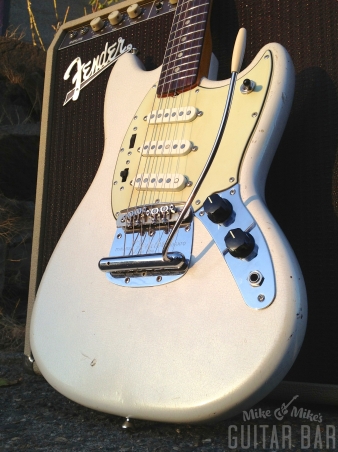 As you can imagine, Skye was already having some big ideas for his ‘new’ guitar based on the Fender Mustang: ‘Stang body, 24” neck and three pickups, loosely inspired by the Mustang Thurston Moore was seen with back in the ‘90s. Skye had loved that guitar since high school (and who hasn’t!) and wanted something close to this ‘hero’ guitar.

We deliberated for weeks over specs – pickups, electronics, switching options, necessary tones and how to get them, and any little touches that would make this guitar truly his. Skye’s tastes, however bold they may be, are decidedly vintage in look and feel, so instead of sourcing a new body with custom routing, we were able to procure a vintage ’65 Mustang neck and a refinished body of similar vintage. (We did have to talk Skye out of buying an absolutely beautiful, original black ’65 Mustang for this project, citing our refusal to start removing wood from an otherwise perfectly-kept piece)

Here’s what we came up with:

The end result is elegant of the above list turned out to be a little mysterious and very punk rock. Honestly, nailing down the basic specs for this build was the easy part. Figuring out just how to make all of this work required some more thought. Read on for in-depth details on how we created “The Skjelstang!” (Pronounced: shyell-stang)

As you might expect, we had to remove quite a bit of wood to make this custom pickup scheme fit properly. Adding a middle pickup and a toggle switch to a Mustang means removing a lot of wood, but using a Jazzmaster-style roller volume bracket required not only more routing, but modifying the metal bracket for the usual rhythm circuit controls. 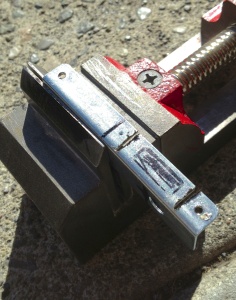 It seemed that the best place for the roller control was between the middle and neck pickups, given that the spacing between the bridge pickup and the slider switch was already so tight. I took out about 40% of the wood left between the neck and middle pickups to accommodate, and I took the wood down to just below the original routing depth to ensure that everything would fit three-dimensionally.

As for the bracket, I cut it in half and drilled new holes for proper mounting screw placement, then cut a channel in the middle of it for the roller disc to pass through. Because of the placement of the pickguard and the slot for the slider switch, I had to get creative with how we were mounting the mini Alpha pot to the bracket, flipping it around so the disc was on the inside of the bracket with the potentiometer’s casing facing the pickups.

Certainly there are many ways to have the pickups working independently of one another, but serving Skye’s needs was the first priority. Initially we thought using a Jaguar switching plate to be the best option; the three on/off switches usually found on Jags could be repurposed to accommodate three pickups instead of the normal 2 pickups and ‘strangle’ switch combo, a modification which we’d done before with the Skyemaster. We also discussed using a ‘Wronski’ plate, so-called because of surf legend Dave Wronski’s custom blade switch plates on his guitars. Then there was the control plate found on the Kurt Cobain Jaguar, which has a toggle switch and an on/off switch for the strangle.

After discussing all of this with Skye, none of the above options were going to work; yes, Skye needs the third pickup to be independently selectable, but he was also hoping to be able to blend it in with the others regardless of pickup selection. This presented a slight challenge with respect to both wiring and space, but in the end I’m really proud of our solution.

On the bass side of the Mustang body, you’ll usually see two three-way slider switches which govern the pickups. These switches not only turn the pickups on or off, but the third position reverses the phase of each unit, enabling more tones than a more simple layout might produce. This is one of the coolest things about Mustangs in my opinion.

Gleaning inspiration from both of the aforementioned guitars, we came up with a ‘best of both worlds’ scenario: both neck and bridge pickups are wired to the toggle first, then to the lead circuit controls just as you might find with a Jazzmaster.* The middle pickup is wired to its volume roller, then to the three-way slider so Skye can still control the middle volume independently while still opting for specific phase settings. The lead and middle circuits meet at the output jack, allowing the user to blend the middle in as needed or to cut the other pickups so the middle can be used independently. Pretty great!

*this, of course, is doing away with the rhythm circuit entirely 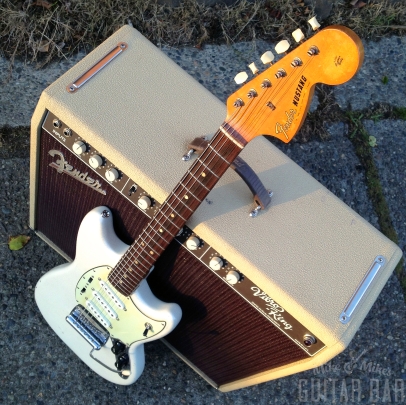 The vintage Mustang neck on this guitar has a 24″ scale, 7.25” radius fretboard, a new bone nut hand-cut by yours truly and original frets. I’ve dressed them, but in the future we may re-fret the neck altogether depending on how Skye feels about the guitar in a few months. And honestly, there’s only a little life left in those frets, so it’s better to do that sooner rather than later given the Foxes’ recording schedule. We’ll see.

As with all of Skye’s offset guitars, it was obvious that we’d be installing a Mastery Bridge. In our opinion, the Mastery Bridge is the best aftermarket upgrade you can get for your offset guitar so you can imagine that it not only sounds great but plays superbly with this bridge installed. Speaking of sound…

Usually, a Mustang has two flat-pole Stratocaster-style pickups mated to the usual 250K pots. On the Skjelstang we used a 1 meg volume and a 250K tone coupled with a .047uf Orange Drop capacitor, which gives the guitar the ability to get VERY bright should Skye require it. His other guitars are mainly Jazzmasters and Jaguars, so this isn’t out of left field for him. We originally went with 1 meg controls for both volume and tone, but the result was so shrill that even my initial test run with the guitar was a painful exercise. Stepping down the tone to 250K really warmed it up, even at 10 on the dial. I would estimate that rolling off the tone 20-30% approximates more standard Mustang sounds.

Now that the guitar’s fully assembled and finalized, I can tell you that I enjoy immensely the addition of that middle pickup on this guitar. I would never refer to Mustangs as tonally limited, but I’m surprised at how much adding the extra pickup has opened up the sonic landscape of this instrument. Yes, having the middle paired with the neck or bridge pickup elicits quacky, nearly Stratocaster sounds, but the short scale of the Mustang combined with heavy strings makes for a more springy, unique tone. Running all three pickups together sounds HUGE, and reversing the polarity of the middle pickup makes for some entertaining rhythm sounds and haunting leads. Endless fun can be had here, folks.

At the end of the day, it’s all about serving the needs of the player, and in this case I feel as though we’ve hit the nail on the head. Now, that doesn’t mean we won’t change anything about the guitar down the line – we’ve made more than a few alterations to the Skyemaster, catering to whim after whim as Skye became more familiar with both the instrument as his personal needs. We fully expect some tweaks to happen, but in terms of taking the original concept and bringing it to life, I don’t think we could have done a better job!

Seriously, this thing is wild!