SPITFIRE (You’ll Get Caught Up In The…)

They say money can’t buy happiness, but scoring a deal on a roughed-up 1963 Jaguar is pretty damn close. The guitar in question retained all of its original hardware and even the case, but because it had been poorly refinished in a horribly thick, yellowed-out white, it could be had at a deep discount. I had been looking for a project Jaguar to utterly ruin for some time, so I jumped on it. 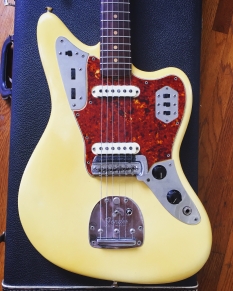 As soon as it arrived, I set about the task of stripping the finish, which had the texture of a Pringle’s chip. I sent the body off to be refinished by the incomparable Joe Riggio, whose spot-on work truly deserves its own blog post. When it came back, the Charcoal Frost Metallic finish was perfect and the aging was tasteful as well as thoughtful. Joe is one of the few relickers out there that seems to understand that old guitars started out glossy, which is one reason his finishes look so authentic.

Once the guitar came back from Joe’s, I knew that such an attractive guitar would need an equally alluring pickguard as the original wasn’t fit for my purposes. For this, I turned to Mark of Spitfire Tortoiseshell Pickguards.

For the uninitiated, Spitfire Tortoiseshell Pickguards is the most respected purveyor of vintage-style shell. Whereas many of the available shell guards on the market lack the depth and character of the original Fender celluloid guards, Mark has approached the task of recreating that swirly handsomeness as a true craftsman.

Each bespoke piece is handcrafted using a number of made-to-order options to narrow down color and degree of aging suitable to match the customer’s instrument. And even better, Mark is a pleasant sort of fellow who puts up with endless questions with an ironclad resolve. Believe you me, I tested this extensively. When you speak with him, you get the sense that he really wants you to love his work because he loves his work.

It’s Good to Have Options

When you order, the form will run you through all of the possible selections, from color to style, to the various types of relicking available. There are four basic colors––Faded Orange, Bright Red, Vintage Burgundy, and Vintage Dark––as well as a range of different pattern types; “Subtle” is a very gentle gradation from orange to red, appearing almost solid from a distance; “Speckled” is what you’d expect from most early tort guards, with more distinct patterns; “Crazy” has very pronounced, sometimes jagged bursts of color; “Solar Flare” is for the more adventurous, making a bold, brash visual statement that’s worthy of the churning, molten nature of our solar system’s bright center.

“Condition” allows you to choose the degree to which the guard is artificially aged, from new to Extra Heavy. New guards will, obviously, look brand new while the relic process becomes more drastic from there. Extra Light guards will have the patina of a closet-kept example, while Heavy will resemble a guard that’s seen thousands of nicotine-soaked bar gigs and relinquished its glossy shine long ago. If you want the premier vintage experience, you can even have them pre-warped!

In addition to those options, you’ll also see the price breakdown for pickguards, ranging from a modest $50 for white, $75 for mint, and all the way up to $230 for relic tort guards. Let’s be real: It’s true that $200 for a pickguard will seem steep to many of you reading this, and I fully understand. Like many of the toys we guitarists employ, a Spitfire pickguard is a luxury item, so if you’re unconcerned by vintage-correct looks and a 30-degree bevel, then there are plenty of other options out there.

However, I think the price point justifies itself relatively easily. For the sake of perspective, actual vintage Fender pickguards routinely sell for $300 and higher, so choosing a Spitfire guard––made to your specs and without the threat of shrinkage––makes good sense when you’re in the market. Surely, there are other options for custom guards, but none of them offer the level of detail or control over the look of the thing, only how it’s cut. The attractive nature of Spitfire’s work and the number of available colors makes it well worth the asking price.

I Went With A Burgundy

I can hardly believe it’s the same guitar

Clicking submit sends your order off to Mark, who will follow up to let you know he’s received it. Ask him some pressing questions if need be, lay down the $50 deposit, and you’re set! If it all seems a bit overwhelming, bear in mind that you’re not just picking something off of the shelf, you’re ordering unique kit custom-tailored specifically for your guitar, and this will help Mark match it perfectly.

Over the years I’ve had the pleasure of installing a few Spitfire guards, so I knew the fiery nature of Mark’s work well. Fit and finish is normally excellent, and once installed the Spitfire guard lends a certain allure to the instrument. When compared with modern tort, especially that found on new production instruments, the difference is staggering.

I ordered a Vintage Burgundy guard in the Speckled ‘60s variety, lightly aged. The time between ordering my guard and receiving it was about two weeks, which isn’t bad at all. When it finally arrived, I was floored by how vivid and bold the pattern looked in person. Deep reds and browns as well as orange-yellows were present, and the swirl was particularly lovely. I especially like how the colors seem to dance like flame in direct sunlight.

I took an immediate liking to the guard as well as the new “Thin Line” material, with white-black-white layering which more accurately replicates the sandwiched materials of vintage 1960s pickguards. The aging was also tasteful and not at all overblown like one might expect in this era of torched and mutilated custom guitars. The shine was dulled a bit, but not completely eradicated, and the edges were given a touch of a brownish-yellow hue to tone down the bright white of freshly-cut plastic. 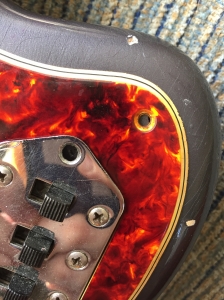 The general fit of the guard to my 1963 Jaguar body was snug as far as the outer perimeter is concerned, better than most other aftermarket guards, too. The lines of the pickguard mated cleanly with those of the Jaguar’s various control plates, a characteristic fault of aftermarket Jaguar guards. It may be true that they’re a tougher guitar to get right––what, with all of the control plates––but Mark’s made short work of it. A couple of the screw locations didn’t line up perfectly, particularly in the treble-side cutaway. This didn’t totally surprise me, given that it’s a vintage guitar and I believe Mark uses an AV65 template. In any case, they aren’t so off that I won’t be able to mount it, but concerned parties should know that sending a tracing isn’t out of the question.

In the interest of being Fair and Balanced (remember that?) I suppose my one critique would be with the images presented on the Spitfire website. There’s a lack of consistency in lighting and quality throughout the Gallery section, where the mix of sunlit and indoor photos can lead to some confusion between the four basic tort varieties, particularly with the very different Bright Red and Burgundy where many shots imply some overlap. (see below) 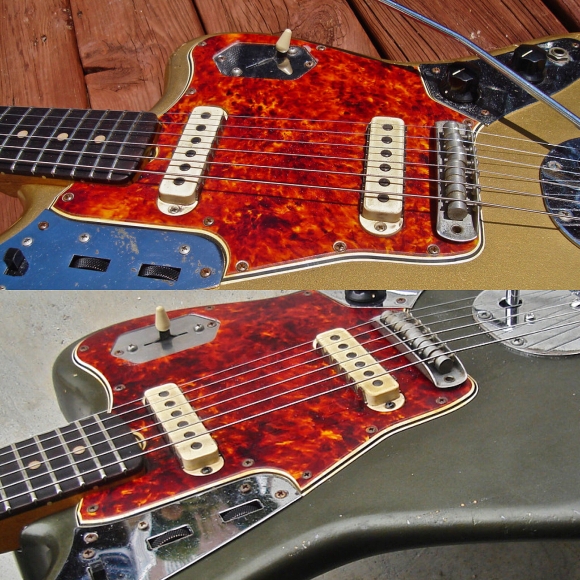 Of course, these are mainly comprised of images from happy customers, which is surely a fine thing––and so many of them, too! I think even a single well-lit professional studio shot of the four styles placed together would do the trick, something that gives potential customers a better idea of what they should expect when ordering.

So, how does Spitfire hold up when compared with original 1960s tort? Beautifully! It’s definitely in the same arena as vintage tort, although it does have its own distinctive look. That’s not to say it’s inferior by any stretch, but it’s difficult to quantify until you’ve seen them both side-by-side. Here’s a shot of the Spitfire next to the original guard on on Pancake, my 1961 Jazzmaster.

For lack of a better descriptor, I’d say the Spitfire is more ‘in focus’ if that makes any sense; the Fender piece has a sort of burred smoothness to its pattern whereas the Spitfire has cleaner, more defined edges to its colors. There’s also a tightness to the grouping of colors here, with yellows most prevalent in the middle of the guard, with browns and dark reds surrounding. The ’61 material more or less stays uniform throughout.

This, however, is the strength of the Spitfire: It’s a one-of-a-kind work of art, like a thumbprint for your guitar. With Spitfire, you’re guaranteed to receive something that no one else will have, something meant to enhance the visual essence of your instrument. Instead of simply rehashing the techniques of old, Spitfire’s taken them a step further. The results? Gorgeous.

Check out Spitfire and start your order HERE. Now to find time to finish this Jaguar. 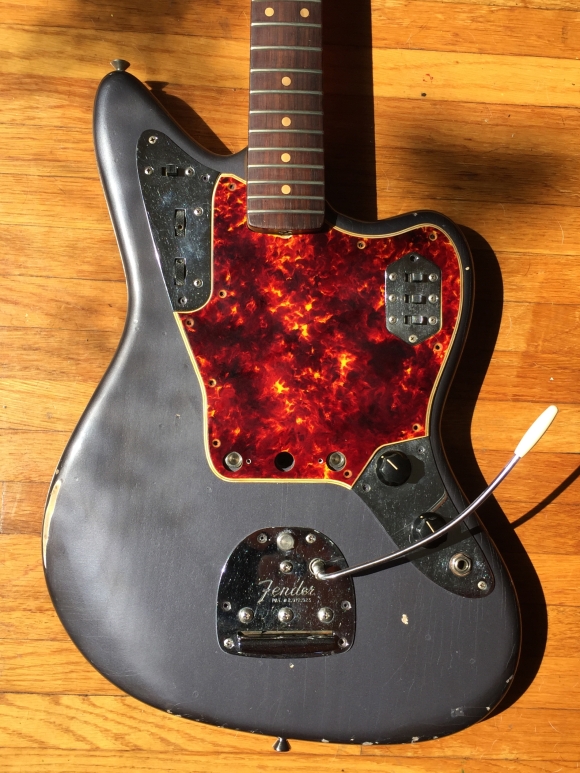